The Elements of Eloquence: Secrets of the Perfect Turn of Phrase

From classic poetry to pop lyrics, from Charles Dickens to Dolly Parton, even from Jesus to James Bond, Mark Forsyth explains the secrets that make a phrase—such as “O Captain! My Captain!” or “To be or not to be”—memorable. Institutions of Divine and Secular Learning

As a minister of the Ostrogothic regime in the time of Theoderic, Cassiodorus had as brilliant a political career as any Roman of the late empire. Around 538 CE he published a collection of his state letters under the title of Variae (TTH 12), and disappeared from the public record. Half a century later, dying at his country estate in Calabria, he left behind the exemplars for another world of texts: that of the Christian universe of Scripture, now encompassing the Seven Liberal Arts.

Part of a detailed compendium of late-Roman learning in each of the seven liberal arts, set within an amusing mythological-allegorical tale of courtship and marriage among the pagan gods. The text provides an understanding of medieval allegory and the components of a medieval education. On the Freedom of a Christian

Perhaps the clearest and most influential statement of the principles driving the early Protestant reformers, Martin Luther's On the Freedom of a Christian (1520) challenged the teachings and authority of the old Church while simultaneously laying out the blueprint for a new one.

The Metalogicon of John of Salisbury

2015 Reprint of 1962 Edition. Full facsimile of the original edition. Not reproduced with Optical Recognition Software. "The Metalogicon", completed in 1159, is recognized as a milestone in the history of educational theory. Undertaken to defend the thorough study of the Trivium against attack at the hands of those who wished less attention accorded to grammar, logic, and rhetoric, it is a treasure of information about twelfth-century pedagogy as well as an enduring classic in its own right. John of Salisbury, a leading medieval scholar, summarizes the essential lineaments of existing twelfth-century education and affords glimpses of contemporaries such as Peter Abelard, Gilbert de la Porree, and Theirry of Chartres. The present translation is the first to appear in any modern language. In Lois Lowry’s Newbery Medal–winning classic, twelve-year-old Jonas lives in a seemingly ideal world. Not until he is given his life assignment as the Receiver does he begin to understand the dark secrets behind his fragile community.

The Giver, the 1994 Newbery Medal winner, has become one of the most influential novels of our time. The haunting story centers on twelve-year-old Jonas, who lives in a seemingly ideal, if colorless, world of conformity and contentment. Not until he is given his life assignment as the Receiver of Memory does he begin to understand the dark, complex secrets behind his fragile community. Lois Lowry has written three companion novels to The Giver, including Gathering Blue, Messenger, and Son. The Etymologies of Isidore of Seville

This work is a complete English translation of the Latin Etymologies of Isidore, Bishop of Seville (c.560–636). Isidore compiled the work between c.615 and the early 630s and it takes the form of an encyclopedia, arranged by subject matter. It contains much lore of the late classical world beginning with the Seven Liberal Arts, including Rhetoric, and touches on thousands of topics ranging from the names of God, the terminology of the Law, the technologies of fabrics, ships and agriculture to the names of cities and rivers, the theatrical arts, and cooking utensils. Isidore provides etymologies for most of the terms he explains, finding in the causes of words the underlying key to their meaning. This book offers a highly readable translation of the twenty books of the Etymologies, one of the most widely known texts for a thousand years from Isidore's time. 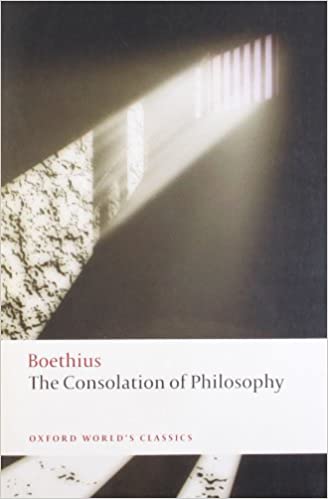 The Consolation of Philosophy

Boethius composed De Consolation Philosophiae in the sixth century A.D. while awaiting death by torture, condemned on a charge of plotting against Gothic rule, which he protested as manifestly unjust. Though a Christian, Boethius details the true end of life as the soul's knowledge of God, and
consoles himself with the tenets of Greek philosophy, not with Christian precepts.

Written in a form called Meippean Satire that alternates between prose and verse, Boethius' work often consists of a story told by Ovid or Horace to illustrate the philosophy being expounded. The Consolation of Philosophy dominated the intellectual world of the Middle Ages; it inspired writers as diverse Thomas Aquinas, Jean de Meun, and Dante. In England it was rendered into Old English by Alfred the Great, into Middle English by Geoffrey Chaucer, and later Queen Elizabeth I made her own translation. The circumstances of composition, the heroic demeanor of the author, and the Meippean texture of part prose, part verse have been a fascination for students of philosophy, literature, and religion ever since. The Power of Money: Coinage and Politics in the Athenian Empire

Was Athens an imperialistic state, deserving all the reputation for exploitation that adjective can imply, or was the Athenian alliance, even at its most unequal, still characterized by a convergence of interests?

The Power of Money explores monetary and metrological policy at Athens as a way of discerning the character of Athenian hegemony in midfifth-century Greece. It begins with the Athenian Coinage Decree, which, after decades of scholarly attention, still presents unresolved questions for Greek historians about content, intent, date, and effect. Was the Decree an act of commercial imperialism or simply the codification of what was already current practice?

Figueira interprets the Decree as one in a series concerned with financial matters affecting the Athenian city-state and emerging from the way the collection of tribute functioned in the alliance that we call the Athenian empire. He contends that the Decree served primarily to legislate the status quo ante. Cicero: On the Orator

From Amazon: "Cicero (Marcus Tullius, 106–43 BCE), Roman lawyer, orator, politician and philosopher, of whom we know more than of any other Roman, lived through the stirring era which saw the rise, dictatorship, and death of Julius Caesar in a tottering republic. In his political speeches especially and in his correspondence we see the excitement, tension and intrigue of politics and the part he played in the turmoil of the time. Of about 106 speeches, delivered before the Roman people or the Senate if they were political, before jurors if judicial, 58 survive (a few of them incompletely). In the fourteenth century Petrarch and other Italian humanists discovered manuscripts containing more than 900 letters of which more than 800 were written by Cicero and nearly 100 by others to him. These afford a revelation of the man all the more striking because most were not written for publication. Six rhetorical works survive and another in fragments. Philosophical works include seven extant major compositions and a number of others; and some lost. There is also poetry, some original, some as translations from the Greek."